What does the appearance of my dog’s nipples mean? Unfortunately, many dog owners are unaware of what their dog’s nipples should look like and what it means when they appear abnormal.

Sometimes a dog’s nipple appearance can become alarming when it does not look normal. I am writing about what normal dog nipples vs pregnant dog nipples look like, and other irregular appearances of dog nipples.

I will also answer some common questions that dog owners might have about their dog’s nipples.

Below are some common words and their meaning that will help you understand this article and your veterinarian. If you do not know what a word means when you speak to your veterinarian, ask them to explain the term.

What Is The Purpose Of Dog Nipples

The purpose of nipples and mammary tissue is to provide nutrition and sustenance for newborns. Mammary glands are composed of different tissue types. One type of tissue, called secretory tissue, produces and leaks milk when it becomes active during pregnancy, pseudopregnancy, and lactation.

This tissue commonly remains active for four to fifty days after weaning the puppies. The nipple is present in male and female dogs to indicate the location of the mammary gland beneath the skin.

Dogs generally have between eight to twelve nipples, with four to six nipples in parallel rows on each side of the underside of the body from the chest to the groin area.

The most common number of nipples is five on each side, totaling ten nipples. The nipples will be evenly spaced and staggered to make them more accessible for the puppies to suckle.

For dogs not exhibiting signs of pregnancy, the nipple and mammary tissue will be soft and the same color as the skin around it. The nipple will be flush with the skin or might stick out slightly.

However, suppose the dog has had numerous litters. In that case, the nipples and mammary tissue might remain enlarged even when they are not exhibiting signs of pregnancy. For instance, a dog obtained from a puppy mill situation might have nipples that almost or do touch the ground as she walks. In that instance, your veterinarian will determine the appropriate plan of action.

Can You Tell If Your Dog Is Pregnant Just By Their Nipples?

Enlarged nipples are not a definitive diagnosis of pregnancy.

In some dogs, the mammary tissue will become enlarged during menstruation. Yes, a dog’s nipples will become swollen during pregnancy. However, dog nipples can become engorged for other reasons other than pregnancy. Later in this article, I list several different causes of swollen nipples.

When and How Does A Dog’s Nipples Change During Pregnancy?

The nipples will start to soften and swell at around day forty-five (around six and a half weeks). At this point, some darkening of the skin tone might develop in the nipple and surrounding skin. (Noakes et al., 2001)

At around day fifty (about seven weeks), the mammary glands will significantly swell as they fill with milk secretions. (Noakes et al., 2001)

The nipples will leak a watery milk substance about two to seven days before the dog gives birth.

Is There Anything I Need To Do For My Pregnant Dog’s Nipples?

If your dog is pregnant, then the enlarged nipple is a natural process. However, the nipples can become diseased.

We always recommend feeling the nipple and mammary tissue to ensure it has not become warm to the touch or “lumpy” in texture. Regular monitoring of the mammary gland’s appearance and texture can help discover disease early before it becomes too severe.

As the dog nurses, the body naturally produces milk. It releases when the puppies massage the mammary tissue during nursing.

The nipples will appear large but soft and smooth when you feel them. If gently squeezed, you might express some milk from the gland.

The nipple can appear darker since increased blood flow to that area occurs. Suppose you notice a puppy is having difficulty finding the nipple. In that case, you can massage the mammary tissue towards the nipple to help express milk to attract the puppy to the nipple.

Can A False Pregnancy Lead To Enlarged Nipples?

The short answer is Yes. Pseudopregnancy, or false pregnancy, is a hormonal imbalance that exhibits signs of pregnancy.

The dog might exhibit nesting behavior and have physical changes. Swollen nipples, swollen mammary tissue, and milk production can occur. If the dog experiences pseudopregnancy often, your veterinarian will recommend spaying your dog.

What Are Some Other Causes of Swollen Nipples in a Non-Pregnant Dog?

Your Dog May Have Mastitis

Mastitis is the medical term for inflammation or infection of the mammary glands. This disease can be seen in dogs that are actively lactating or in pseudopregnancy. Bacteria traveling through the nipple into the underlying tissue is the cause. Signs of this disease include but are not limited to pain, heat, swelling, and abnormal milk production.

Your Dog May Have Galactostasis

Galactostasis is the medical term for the abnormal accumulation of milk in the mammary gland. In this disease, the milk is building up but not being excreted.

This disease can sometimes be associated with infectious or non-infectious mastitis. This condition can also develop after weaning puppies or during pseudopregnancy. Engorged mammary glands, inflammation, swelling, and discomfort are common clinical signs of this disease.

Your Dog May Have Agalactia

Agalactia is the medical term for failing to produce and excreting milk from the mammary gland. This disease can be due to developmental abnormalities, failure of milk letdown, and other conditions. Some diseases that can cause agalactia include poor nutrition, illness in the body, and anxiety, commonly seen in young, first-time mothers.

Your Dog May Have Galactorrhea

This condition is the most common symptom noted in pseudopregnancy and resolves spontaneously. If a dog has recurring episodes, then surgical sterilization is recommended.

Your Dog May Have Mammary Gland Tumors

Mammary gland tumors are the most common tumor in female dogs of all breeds. These tumors are seen more in unsterilized dogs.

The longer the dog has sexual hormones flowing in the body, the higher the risk of these tumors developing. Since these tumors are commonly malignant, most veterinarians recommend spaying the dog after its first or second heat cycle.

What Types of Tests Are Used to Evaluate Mammary Tissue and Nipples?

Bloodwork is a standard testing tool used by most veterinarians. It helps tell them about signs of anemia, infection, dehydration, and organ dysfunction.

Urinalysis is another tool used to determine the potential for infection and organ dysfunction. A urinalysis primarily tests the kidneys, whereas bloodwork can test multiple areas.

Radiographs, commonly called x-rays, might indicate if there is a tumor present within the body. The most common type of x-rays requested by veterinarians is chest x-rays or thoracic x-rays. This is because most tumors related to mammary glands spread quickly, and the first location they spread to is the chest.

The veterinarian will order a culture and sensitivity testing if an infection is suspected. A sample is tested against a variety of antibiotics to determine what antibiotic is the best option to treat the disease.

A biopsy removes a small tissue sample from an area. The veterinarian or an outside laboratory then evaluates the sample under a microscope. Sometimes the removal of the entire gland is required to determine the specific cause of the disease.

Nipples and mammary tissue in dogs can be normal in appearance, for example, smooth. However, the nipple and tissue can also be abnormal, for example, swollen, due to various causes.

For instance, swollen nipples and mammary tissue can indicate pregnancy and diseases like pseudopregnancy, mastitis, and tumors.

For example, suppose your dog is spayed but showing signs of pregnancy, like swollen nipples. In that case, it is more likely that a pseudopregnancy is occurring.

On the other hand, suppose your dog is pregnant, and the swollen nipples are “lumpy” in texture. In that case, this could indicate that the dog is experiencing mastitis or another mammary tissue disease.

Lyssa Fansler currently resides in Rio Vista, Texas. She lives with her husband, Jake; her two dogs, Thing and Nix; and her cat, Hey Buddy. She believes all animals deserve a compassionate and understanding voice that can be there in their time of need. Lyssa loves to learn and is known to have over fifty–nine gigabytes of digital textbooks. She regularly attends continuing education to improve her knowledge and to learn new and better practices in veterinary medicine. 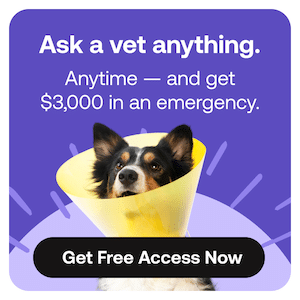